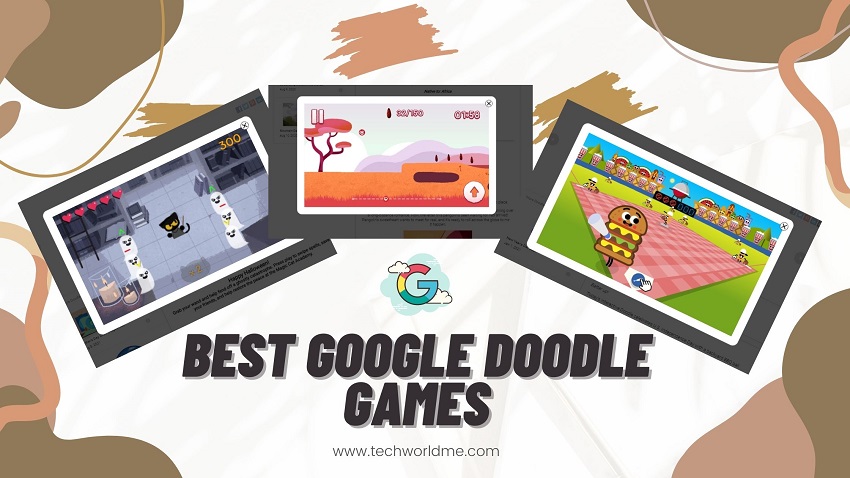 Google keeps on bringing some entertainment to its users through its google doodle game. They try their best to keep our users entertained by not letting them get bored. So he added some fun games to his homepage to make it entertaining. Google always keeps its homepage fresh. Google keeps changing the entertainment content on its homepage every few days. So Google has formed its own Google Doodle team to entertain the users and to support them in their empty space, Which keeps on bringing fresh and entertaining games to Google’s homepage from time to time.

Google keeps adding fun games to celebrate doodle special events and anniversaries. The duration of these games is a maximum of 3 minutes to 15 minutes, some games last longer because these games are made for a short time. Let’s leave the further details and move on to our topic of the best google doodle games.

Coding Carrot was launched by the team of Google Doodle to celebrate 50 years of Kids programming language. This is a simple coding block game in which we have to set the blocks and send the rabbit in the right direction and feed all the carrots at once. In this game, you are given a green arrow point at the bottom, which you have to set. There are also some turning blocks that will help your rabbit to turn. In the beginning, this game is easy but as you go to the next level this game will get hard.

Pony Express game is a very interesting and fun game created by Google Doodle. Thanks to Nate Swinehart, the game’s animator and the Google Doodle team for creating the Pony Express game. In this game, you will find many things like stones, cactus, and broken bridges. You have to control your horse and take it to the clearing by saving it from the obstacles. Also, you have to collect mails. You can control your horse by moving up and down. If possible by collecting as much mail as possible, do it and at the same time keep away from obstacles.

As a spirit of a sportsperson, I also love a sports game physically or digitally. Basketball is one of my favourite games on the list of my favourite sports. My friends and I play basketball and compete with other teams. Forget me but sometimes the experience of playing any game digitally rather than physically is different. whether you believe it or not.

In this doodle basket game, you have to shoot as many hoops on the basket in single-player time. This basketball game is actually a part of a four-day google doodle run, where you test your own gaming skills on many fields like soccer, hurdles and slalom canoe.

The technique is very easy to play and hoop the basket every time. Just press the spacebar and release when you want to throw. The extent to which you press the spacebar will determine your throwing power. If you release the spacebar early or hold it too much then the probability is high that you can’t throw properly. Use your IQ and then throw it.

Google Doodle released a Baseball (BBQ) game in 2019 to celebrate Independence Day. This game is very fun. You get players of different types of food like ice cream, hotdogs, lettuce, cheese, watermelon, ketchup, burger, fries and other food.

When you play a baseball game, your opponent is in the form of a peanut. In this game you have to hit the ball low using the spacebar and as soon as you hit, food items come on the plate one after the other. see for yourself the game, you will definitely enjoy it.

Pacman is such a famous game and it cannot happen that Google Doodle does not add a game of Pacman to their list. In 2010, Google Doodle released the game Pacman on their google doodle game list. This game is very easy and you can play it with your friends also. In this, you have to take power from all the ghosts and as soon as you take the power, all the ghosts will turn blue which means that you can eat them. It also has a time limit, after a few seconds, it will be back to normal. If a ghost will touch you then the game is over.

Pangolins are the most trafficked mammal in the world and they hide to save their lives from poachers as well as smugglers who kill pangolins for their purpose. Gradually many of their species are becoming extinct. So the team of Google Doodle has released this game to make people aware of the same thing. In this game, we have to control the pangolin, which keeps rolling. We have to control it with the help of left and right arrows, you can jump the pangolin with the spacebar. Try 100% to get all the items and contribute to matching the pangolin with the female pangolin.

Meow-Lowie Game You all will love this Google Doodle game which they released in 2016 to celebrate Halloween. In this game, there is a black cat named Momo who has magic and by using magic she kills the ghosts and saves her school.

In this game you will come across many who have some symbols on their heads, you have to draw these symbols with the help of your mouse, don’t worry, these symbols are not that hard, even a 4-year-old child can make them.

Most people like spicy food and sometimes they eat so spicy food that they can not tolerate themselves and then tears keep coming from their eyes. And then eat or drink something cold to eliminate the burning sensation in your mouth. So through this game, Wilbur Scoville tells us that if something is too spicy, then the right way to avoid mouth irritation is to drink ice cream or cold milk. And Scoville tells us how hot each pepper is and how many levels of heat each pepper gives off. Through this game, you will learn a lot about Pepper.

Loteria game is a bingo game in Mexico when a person is a winner by placing all the beans in the right place, then he has to say Loteria, it is like the same bingo game, if you like bingo then you will definitely like this game. You can play this game with your friends and also alone.

In the garden gnomes you have to grow plants, don’t think it will be useless. In this game, you would have a catapult in front of you which would move forward and there is a flower pot on the backside, as soon as you feel that the height of this flower pot is correct, then only you should release it.

The controls of this google doodle game are very simple as soon as you press the spacebar the catapult will move upwards and when the flower pot is at its correct height you click with your mouse and that pot will be released and the mission to throw the meter If you throw till there then your mission will be cleared.

Doodle Champion island game is the longest game of Google Doodle so far, it takes about 2 hours to complete. Although this game was released for the 2020 Olympics, it could not happen due to the pandemic year. The controls of this game are like an RPG game, you can control your player by going to the top right and left.

Quick Draw is a very entertaining site, this website asks you to draw within 20 seconds. In this game you will be given a word like key, fish, grasp and much more. You have to make that drawing in 20 seconds. Do try it once.

Google doodle cricket game is like normal baseball, your players will be ants and your opponents will be snails, it is like playing a normal cricket game, only the experience will be lit bit different.

Google Doodle Guitar is instrumental that you can play to pass your time. The Google Doodle team released this guitar to celebrate the experience as well as celebrate the birthday of a musician and an inventor. The Google team for 24 Horses decorated their homepage with a musical theme that inspired all guitarists.

A Look into the Robotics Industry’s Bright Future
October 1, 2022