Apple Music Vs Spotify- Which is the best? 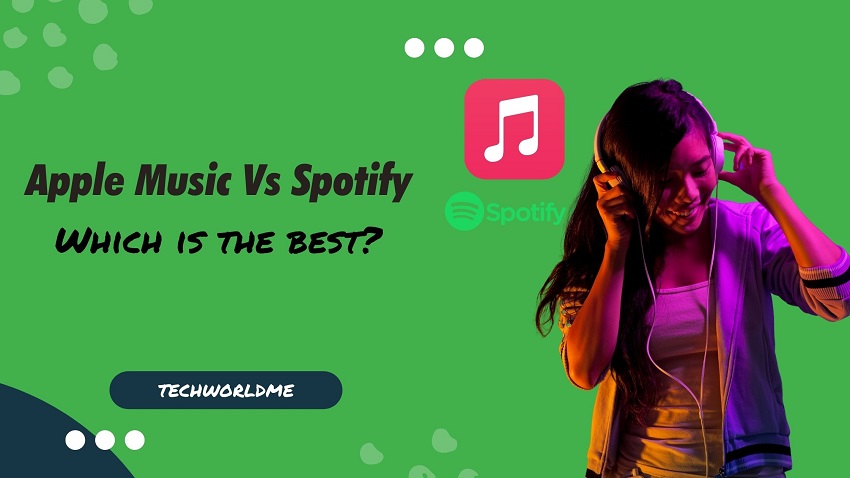 Apple Music vs Spotify which is best? whenever you talk about premium quality music they both have come to mind. According to research, Apple Music is the second-most famous music streaming service.

Apple Music gives you the excess of almost 90 million songs. You can also enjoy the social-networking feature through Connect, which is artist-based. Through Connect, artists can share unique content like BTS and snippets of new songs with their fans.

The price is the same for the vast majority of paid subscribers. Both Apple Music and Spotify demand $9.99 per month (or $4.99 for students). Yet, you may save money by paying $99.99 in advance for an entire year, which reduces the price to $8.33 per month.

Both systems have premium plan features that are analogous, such as:

But here Spotify has a strength and that is it’s available on many devices, whether it has a screen or is a smart speaker.  Like Android (mobile app), The iPhone (mobile app), Windows and Macintosh (desktop app), Browser for the web (yep – head to open.spotify.com), Devices for Google Home/Nest Audio, Amazon Echo speakers, and smart displays

If your TV supports casting/Chromecast, you can play music through Spotify Connect. It allows you to control other devices playing your Spotify account from any Spotify app, and it’s pretty brilliant.

Spotify employs the Ogg Vorbis or AAC format. On mobile, you may select the bitrate to stream in increments of up to 320 Kbps, which is helpful for mobile data users. When using Spotify’s web player, it streams in AAC at 128 Kbps for free users and 256 Kbps for premium users.

Apple Music now plays 256Kbps AAC files, and certain tracks now have spatial audio. On the iPhone, users must enable lossless audio by navigating to Settings. Later in 2021, Spotify will introduce a HiFi subscription for lossless audio. Read this in-depth comparison of sound quality between Apple Music and Spotify.

Apple Music completely outperforms Spotify in terms of audio streaming quality. Upgraded Apple Music supports a lossless audio rate of up to 24-bit/192 kHz and spatial audio. In comparison to Spotify’s highest option of up to 320kbps bitrate. Interestingly, this upgrade allows them to stream music in audiophile-grade quality.

If you enable iCloud Music Library, you will be able to access your music library on all devices. It allows you to get cut-off songs and “match” them in your library with those in the iTunes catalog. You may listen to your music wherever you have your Apple ID logged in with this great opportunity. You have the option of storing up to 100,000 songs.

Spotify also allows you to play music from your device in the Spotify app, although it works for local files. Spotify is the only service that includes podcasts in its app, and Apple has separated podcasts into separate podcast apps.

Apple Music wins here for integrating your library, while Spotify wins for podcasts.

Performance of Apple Music vs Spotify

There is a definite compatibility difference between them when it comes to performance. Apple Music is speedier, has Siri built-in, and gives better sound quality than Spotify.

Another critical component of music services is the simplicity of the personalized playlists. In this regard, Spotify outperforms Apple Music. Spotify’s architecture focus on creating and listening to curated playlists over time. While Apple Music’s layout is relatively focused on what you’re listening to right now. There are fewer steps to adding songs to a Spotify playlist than adding to an Apple Music playlist.

Comparing Apple Music VS Spotify connectivity, the Apple ecosystem is better. It’s effective on Apple, where you can send audio from your iPhone or ask Siri to play your favorite music. Yet, if you want to mix and match your hardware makers, Amazon Echo customers can also select Apple Music.

All this is great, but it cannot (yet) compete with Spotify, which has been streaming music for more than a decade. As a result, it includes apps for everything you can think of, from Xbox to your smart TV and much more.

The best part is Spotify Connect, which allows you to transfer your music from one device to another. You can listen to music on your PC and then select your kitchen speaker from the Spotify Connect bar.

Spotify vs Apple Music: Which Is Better?

As in the case of Spotify vs Apple Music, both have advantages and disadvantages. Apple Music has superior sound quality and is ideal for those who are more into the Apple ecosystem, and Spotify triumphs about connectivity and podcasts.

It takes time to teach each of these services to understand your preferences, and Spotify’s personalized playlists do a superior job of adapting them to us for our money.

Finally, you may be better off obtaining a free trial and enjoying their services for a limited time. This free trial helps you to determine which works best for your circumstances. In Spotify VS Apple Music, the choice is difficult as both are doing well in their domains according to their users’ preferences.